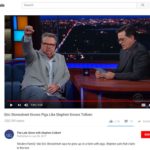 One of the stars of the ABC sitcom Modern Family is Emmy Award winning actor Eric Stonestreet.  A native of Kansas City, Kansas, Eric is a proud 4-H alum. In June of 2017, Eric was a guest on The Late Show with Stephen Colbert.  As most guests do, Eric spent a large part of the interview discussing his ongoing projects (such as Modern Family).  At around the 6:20 mark of the … END_OF_DOCUMENT_TOKEN_TO_BE_REPLACED