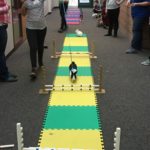 What is Rabbit Hopping? Rabbit hopping originated in Sweden in the early 1970’s. It was patterned after miniature horse jumping. The first national rabbit hopping championship was held in 1987 in Sweden. The popularity of hopping has spread throughout Europe, and now there are rabbit hopping clubs in Norway, Sweden, Denmark, Finland, Germany, and the UK. Rabbit hopping … END_OF_DOCUMENT_TOKEN_TO_BE_REPLACED