What is Rabbit Hopping? 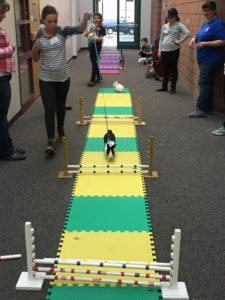 Rabbit hopping originated in Sweden in the early 1970’s. It was patterned after miniature horse jumping. The first national rabbit hopping championship was held in 1987 in Sweden.

The popularity of hopping has spread throughout Europe, and now there are rabbit hopping clubs in Norway, Sweden, Denmark, Finland, Germany, and the UK. Rabbit hopping came to the United States in 2001. In 2012, the American Hopping Association for Rabbits and Cavies was chartered by the American Rabbit Breeders Association.

Rabbit hopping is a performance sport where rabbits are directed to run through a course of jumps ranging from 4”-20” high. The jumps are similar to those used in horse shows but on a much smaller level. All jumps are made with displaceable rails so that if a rabbit does not make it over the jump the rails will fall away. The goal is to go through the course with the least number of faults.

There is also a long jump and a high jump which can be very challenging for a rabbit.

What is Rabbit Agility?

Rabbit agility was developed in Canada and includes many aspects of rabbit hopping, as well as other obstacles that are patterned after dog agility.

Rabbit agility includes the jumps used in rabbit hopping as well as other obstacles similar to the ones used for dog agility. Many of the obstacles have contact zones, and rabbits can be taught how each obstacle works.

There are over 50 recognized breeds of rabbits. Not every rabbit is a good candidate for rabbit hopping or agility. A good hopping rabbit is energetic and willing to please. It is important to note that rabbit hopping and agility is a relationship between a rabbit and his or her handler. Keep in mind that the rabbit’s temperament and the patience of the trainer are the determining factors in hopping or agility success.

Training Your Rabbit for Hopping or Agility

A rabbit that is 4 to 6 months old is easiest to train, but most rabbits will learn at any age if worked with on a regular schedule. You should never hop an overweight rabbit because this might cause physical injury to the rabbit. Rabbits are easily startled. By exposing your rabbit to different noises, surfaces, and surroundings you are teaching your rabbit to pay attention to the obstacles and not to the distractions. Your rabbit needs to learn to relax when you put him or her on the course.