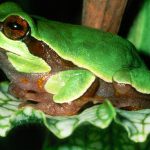 The Garden State is known for corn, tomatoes and blueberries. New Jersey is the “Diner Capital of the World” and home of the famous Taylor Ham vs Pork Roll debate as well as the Jersey Shore.  But, did you know that Southern New Jersey is home to a special habitat called the Pine Barrens? The Pine Barrens are so named because of the sandy soil. European settlers found it was … END_OF_DOCUMENT_TOKEN_TO_BE_REPLACED