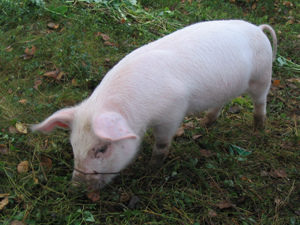 A Yorkshire piglet rooting in soil.

There’s something about that nose of a pig that stands out.  In addition to its unique shape, it also serves some important functions.  Though smell is a given, there are some other utilities employed by pigs that make their nose stand out.  One behavior in particular that seems to stand out is rooting.  But why?  What is it about sticking their noses in dirt that is so appealing to pigs?  Is there something in that soil that they’re after?  Is it just what’s in the soil that makes pigs do this, or is there something else?  And why is it that not all are fans of this behavior?

For starters, given access and opportunity, rooting around the soil they walk on is a natural behavior for swine, and the reasons for rooting are actually quite varied and can fall under one of the following categories; nutrition, communication, relaxation, habitation.., and vexation (the last one not so much for the pigs but rather everyone else around them). 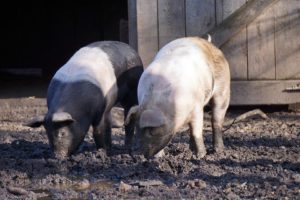 Nutrition
In a time long before nutritional supplements, pigs would root in soil as a convenient way to obtain iron for red blood cell production.  In fact, piglets farrowed (born) in a modern farming facility with a concrete floor, and not provided access to iron supplements, may develop piglet anemia.  Denied access to soil, and not provided iron supplements, the piglet may find itself with a deficiency of iron thereby preventing it from being able to produce a healthy hemoglobin, thereby developing piglet anemia.  As many producers today recognize the importance of iron in the health and nutrition of neonatal pigs, oral iron supplements or more common iron injections are often provided.  Though not as common, some producers, when raising their litters in a barn without access to rooting, provide their piglets with soil.  In this scenario, the soil itself would need to be replaced frequently, with steps taken to make sure there are no parasites or other harmful microorganisms (bacteria and viruses) that could plague the pigs.  As this method is also labor intensive, most modern producers raising pigs elect to provide their swine with oral or injected iron supplements.

Communication
I want to get a message to my friend, what do I do?  Send a text.  Well, try doing that with cloven hooves.  Lacking opposable thumbs, pigs have to get a little more creative in how to convey messages.  Indeed, the vast majority of pig communication is vocal – pigs are known to make, give or take, twenty different recognized sounds.  Even if pigs primarily utilize various grunts and (though my ears have never actually heard it) “oinks”, pigs also use rooting to convey messages both to each other as well as to the humans who interact with them.  Though not strictly a rooting behavior, when a new pig is introduced into an existing herd, the “old pigs” will check out the “new pig” by using their noses to investigate.  There is no set “swine language” to decode, especially when it comes to the nonverbal forms of communication employed by various pigs.  Even so, a nudge with a nose from pig to pig, depending on the veracity of it, may communicate something as benign as, “hey, check this out!,” to a more forceful, “you better NOT check this out!” 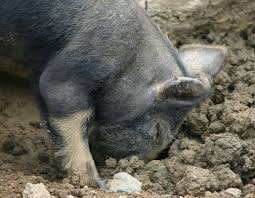 A Hampshire pig using its nose to either look for dinner or to stir up the dirt to find a nice place to relax.

Relaxation
Lacking sweat glands that are as effective as those of humans (stay tuned for an upcoming post for more info on that!), pigs have to find other ways to escape the sun and the heat.  One such way is to use their snout to loosen up the dirt and use this newly tilled soil to cool down.  Remember back to when you were younger?  Playing in a sandbox or digging up holes in the ground?  You probably didn’t have to dig deep to discover what was below was cooler than that which was above.  Rooting is one such way pigs lower their body temperature to cool down and escape the heat.

Habitation
Our friends with the snouts may not be constructing their own barns, but finding a word to describe “nest building” that ended in a “-tion” brought us here.  Gilts and sows root to gather materials to build nests for farrowing.  Even when not provided an appropriate substrate (think soil) to root, pigs will still perform this behavior.  Sadly, without soil or a comparable medium, this rooting behavior can lead to snout injuries and even wear away at the concrete in stalls. 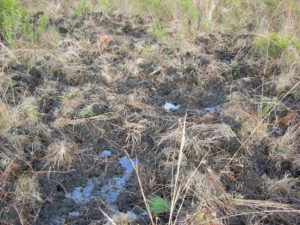 An example of the destruction feral pigs left behind an archaeological site.

Vexation
Well, here is the reason not all are “rooting” for pigs to root.  Though this is not an issue facing large commercial farms or even small family farms, left unchecked, the rooting behavior of swine can have detrimental impacts on the environment and ecosystems.  The type of vexation that follows is not directed at domestic pigs raised for agricultural purposes, but rather at their invasive feral cousins who are as destructive as they are opportunistic.  The feeding habits of feral swine are one of the biggest reasons why they have been so prolific and so easy to adapt to new environments.  The feeding habits of feral pigs is predicated in no small measure to both their ability and their predilection to root.  The diet of feral pigs is one composed of small animals (think worms, insects, or perhaps even rodents), plants, as well as other materials such as algae and fungi.  As mentioned above, in addition to being iron rich, soil is also a veritable smorgasbord of the very diet feral pigs thrive on.  The vexation on the part of humans on account of this rooting behavior of feral pigs stem from the increase erosion of soil, the interruption of the natural decomposition cycle, as well as reducing natural cover that promotes plant growth.

And there you have it.  Of course, there are many other reasons swine root, and to be fair, the last one mentioned (I suspect) is not an issue facing most 4-H youth raising swine projects for the fair.  Perhaps for a future blog, we can delve deeper into why it is that the swine nose is so uniquely adapted for this type of behavior.., but in the words of one of the most famous pigs out there (for now at least).., “That’s All Folks!”