Spring is the time you start hearing the calls of toads and frogs.  You might have even heard the Spring Peepers calling as early as March!  Why do they make these sounds?  What is their purpose?  To find a mate!  Amphibians have a variety of interesting ways of reproducing and preparing for their young. 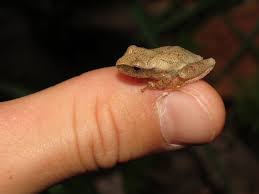 Although there are often exceptions in biology, we can start with some of the generalities of amphibian reproduction.

First, amphibians normally need water to reproduce (although sometimes just dampness or even mud is enough for certain species!). For frogs/toads, the male frog (while in water) will release his sperm over the eggs of a female frog to fertilize them, similar to the way most fish reproduce. Salamanders on the other hand, will lay down a little packet of sperm (also in water), which the female then picks up with her cloaca, and fertilization happens internally and then eggs are laid. Caecilians, a legless and tropical amphibian found equatorially, also have internal fertilization, where the male uses an intermittent organ to transfer sperm into the female’s cloaca directly. Most amphibians lay hundreds of eggs at a time, as very few will survive to adulthood and breed themselves. 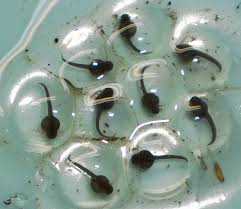 Some other general behavior of many amphibians includes frogs and toads vocalizing to advertise their presence of males to females; male salamanders giving off scents (pheromones) to attract females; and the juveniles of amphibians having to go through a metamorphosis, where there is a larval stage (tadpoles and larval salamanders, which have gills and live in water and can be very different from adults!). Interestingly, frog larvae (tadpoles) are usually vegetarian but once they metamorphosis to adulthood, are entirely carnivorous (salamander and caecilians on the other hand begin life as carnivores and stay that way). For some species though, internal and direct development also occur, where the young are retained in the body until fully formed or where miniature adults hatch out of eggs. Some species can even develop parthenogenically, which means females can reproduce (clone) themselves without a male even being present!

Some amphibians are unique in their habits!  For example:

Paedomorphic salamanders and newts that never grow up. 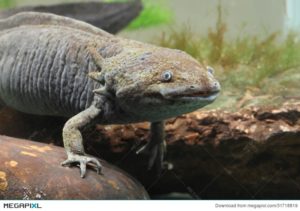 The majority of pond-breeding salamanders have a biphasic metamorphic life cycle where free-swimming larvae living in ponds and other water bodies metamorphose into terrestrial living adults. An advantage of this life history is that it allows adults to exploit different habitats compared to larvae, thus utilizing a wider range of ecological niches and potentially escape from hostile environments e.g. a desiccating pond. However, a number of salamander species within Europe and North America have evolved a unique life history where free-swimming larvae to do not metamorphose into terrestrial living adults, but remain within the water and retain larval characteristics. Known as paedomorphosis these individuals develop into sexually reproductive adults but retain larval traits e.g. free-swimming larval form and gills. For more information visit this site from Froglife.

Some caecilian babies eat the outer layer of their mother’s skin; it is dead but loaded with nutrients. 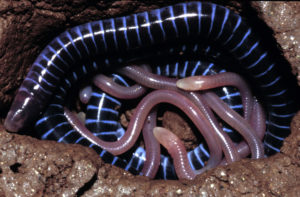 Some caecilians lay eggs in an underground chamber.  After the eggs hatch, the young remain with their mother for four to six weeks.  Alex Kupfer, a zoologist in Germany, decided to investigate.  Most of the time the babies lay quietly with the mother.  But sometimes they begin to crawl all over the mother and tear off pieces of her skin and eat it. The mother is not hurt because the outer layer of the skin is already dead. Learn more with this article from Science News for Students.

Everyone knows it’s a tough world out there, but for Panama’s red-eyed tree frogs, the trouble starts before they have even hatched. That’s because hungry snakes think the “caviar” makes a good meal. Now scientists have discovered that encapsulated frog embryos sense impending doom when they detect the vibrations from a snake’s attack on the egg cluster. Once warned, the developing frogs prematurely hatch from their eggs, drop into the water below and swim to safety as nascent tadpoles.

Left undisturbed, the red-eyed tree frogs usually reach tadpole stage six to eight days after fertilization. But if a snake attacks the gooey group, many of the embryos hatch immediately–one to three days earlier than normal. Researcher Karen Warkentin of Boston University implanted vibration detectors into the egg masses to see if the pre-hatched frogs could distinguish the stimulatory effects of snakebites from other environmental vibrations, like raindrops in a tropical storm for instance. She found the premature hatching occurred only in response to vibrations characteristic of snake attacks–that is, not just any vibration spurred the embryos to leave the comfort of their eggs. So, it appears the developing frogs have picked up a way to escape immediate predation, but also know to stay put if the vibes are friendly.  See a video clip and more info on this site from the National Science Foundation.