Or how research really goes in the field! 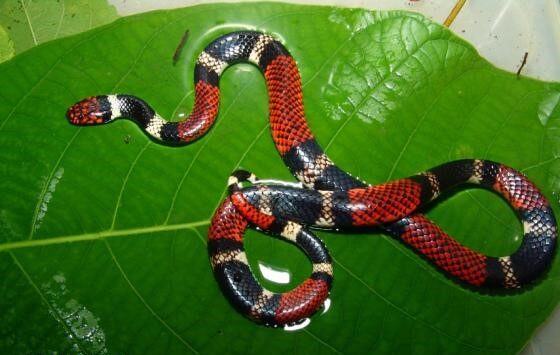 Everyone talks about research being done in the field.  It can sound glamorous, especially when the results are exactly what you hope for or even expect. But the reality is just the opposite.  More often than not, it is what you don’t find or what doesn’t work that helps you learn and adjust your experiment.

Anthony Sena, a first year PhD candidate in Dr. Sara Ruane’s lab at Rutgers University, shares his experiences from this past January, 2020 as he did a pilot study in Guyana on coral snake mimicry:

In order to better understand how the venomous coral snake color patterns affect predatory behavior in other organisms such as birds, I performed experimental methods that were previously established by other researchers who study the coral snake mimicry paradigm using clay replicas of coral snakes and their imitators as well as plain colored snakes. For this experiment I made 12 replicas divided into three different groups based on size. In each group there was a replica that was painted to look like Micrurus surinamensis (the aquatic coral snake); it had red, black, and yellow rings in the formation of a tricolor triad, meaning there were three black rings for every repetition of the color pattern. I also made two control colored replicas. One was green and one was brown with black spots. These two replicas were used to imitate other snakes that do not have aposematic coloration (coloration that warns off predators) that could potentially look like snakes that are found in that region. The last replica was one that had the same tricolor triad pattern as M. surinamensis, but instead of a red coloration it had a green coloration. This replica was used primarily to determine if there was a similar response by predators towards the ringed replicas based on their ringed pattern or on the color of the replica itself. Each of these different color patterns were made for a group that represented small snakes (~6”), medium sized snakes (~9”), and large snakes (~12”). 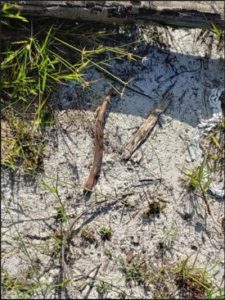 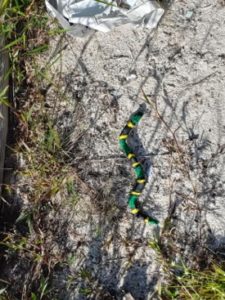 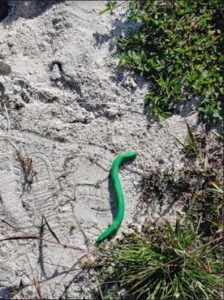 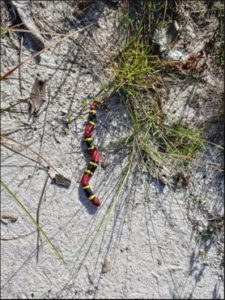 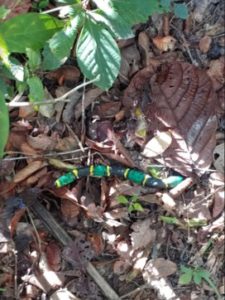 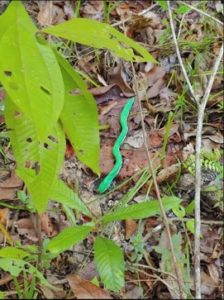 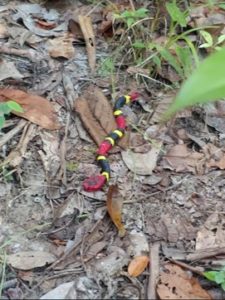 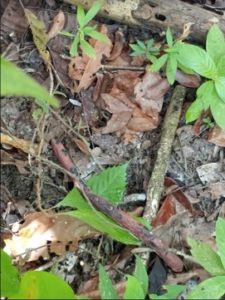 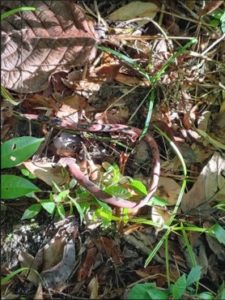 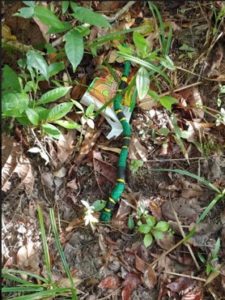 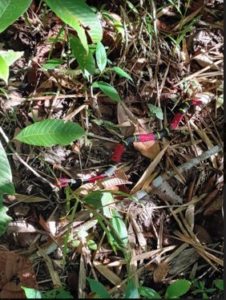 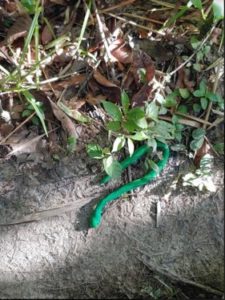 I received help in making these replicas from the three other graduate students who were on the trip as well, Justin Bernstein, Erin McHale, and Megan Wilson. The clay that we used to make our replicas was an air-dry clay that became problematic for our uses because the initial point of using clay was to have potential predators that interacted with the replica to leave marks on the soft clay so that I could compare any differences in attacks between the replicas within and among groups. However, since the clay dried hard it would have made markings by other organisms difficult or impossible. Furthermore, we also painted each replica an appropriate color. Unfortunately, the paint that I used was also problematic for use in the field. The paint was a type of paint that could easily be washed off with water, and since this experiment took place in the literal rain forest, it became increasingly likely that the paint would be washed off of the replicas the longer they stayed out in the field. The third and final problematic obstacle we faced prior to the actual experimental setup was the use of a camera trap. Our initial plan was to use a camera trap to be able to view any events that took place during the interim that the replicas spent in the field. However, when attempting to turn on the camera there was no indication that the camera was working properly so I decided to scrap that idea for this pilot and instead just use a comparative methodology between the snakes, that is, if I could. 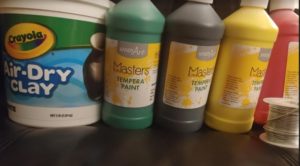 Materials used for this experiment.

Despite these obstacles, I was still excited to see if there was any hope in understanding the phenomena that I went to Guyana to study. Three locations were chosen close to the edge of the river to place each group. The small sized snakes were placed in a more open and sandy area that had a lot of sunlight. The medium sized group was placed in a wooded area with more canopy cover. And the large group was placed along the path’s edge within the forest area. Photos of each of the replicas were taken to both determine their position and to record any markings that existed prior to placement. After walking through the forest and placing the snakes, a peculiar incident occurred; on my way back, I noticed that within the 15 minutes of placement, half of the large green snake was missing by the time I returned. This was at about 4:30 pm on January 11. The following day, when I went to check on the snakes, three of the small sized snakes were moved and lined up on a nearby log. The three snakes were the red surinamensis replica, the green surinamensis model, and the plain green model. Interestingly, the brown model was not moved. This is most likely because the brown replica looked like a stick and even humans could not see it well to determine that it was a snake replica. It is obvious that these replicas were moved by humans because not only were they placed in a row, this location was in plain site of anyone who may work by the river, as it was only a few yards away from the docking area for the boats. Additionally, when checking on the large replicas, two of them were completely missing (the red and green surinamensis). This could have been due to a potential predator removing these snakes from their location, but it is much more likely that they were taken by humans that were in the area, especially since the large snakes were fairly heavy and potential avian predators in that location, such as the kiskadees (Pitangus sulphuratus), would have been too small to carry it off. However, without the camera trap being used, it is impossible to say for sure how and when they were taken. After two more days the snakes were collected on the morning of Tuesday, January 14. When I collected them there were no other replicas missing, but all of the remaining replicas had their paint washed off by the rain, and they were mostly white with spots of color. However, one interesting replica was the small brown snake. When it was collected again, it was green. On top of the lack of color on most of the replicas, the clay also softened to the point that when they were picked up, the replicas completely fell apart.

Ultimately this pilot study, as a data-oriented experiment, failed in almost every way before, during, and after its execution. However, it did allow me to understand the pitfalls of this kind of experimentation. I conclude from this experience that in the future I must use materials that are conducive to the experiment itself but also the environment that the experiment is being performed in. The clay that is used should not harden and should remain slightly malleable so as to record any impressions left behind by predators or any organism that interacted with it. The paint should not be washable especially in locations with a lot of rainfall. Additionally, I would like to have anchored the snakes down using some aluminum wire, this may not have prevented someone from stealing the replicas, but it could have potentially deterred them. Importantly, and more directly, it would also be beneficial to create a sign that specifically states that an experiment is taking place and describe what to look for and how to avoid interfering; this would be a much more beneficial method of deterring human interaction. As a whole, this experiment also had more variables than were necessary, such as replica shape, size, color, and field placement. Any future experiments should cut down on these variables to make a more streamlined and conservative experiment to test a single question. This experience may not have helped me understand the question of coral snake mimicry, but it did greatly improve my understanding of the rigor and planning necessary for field experimentation.