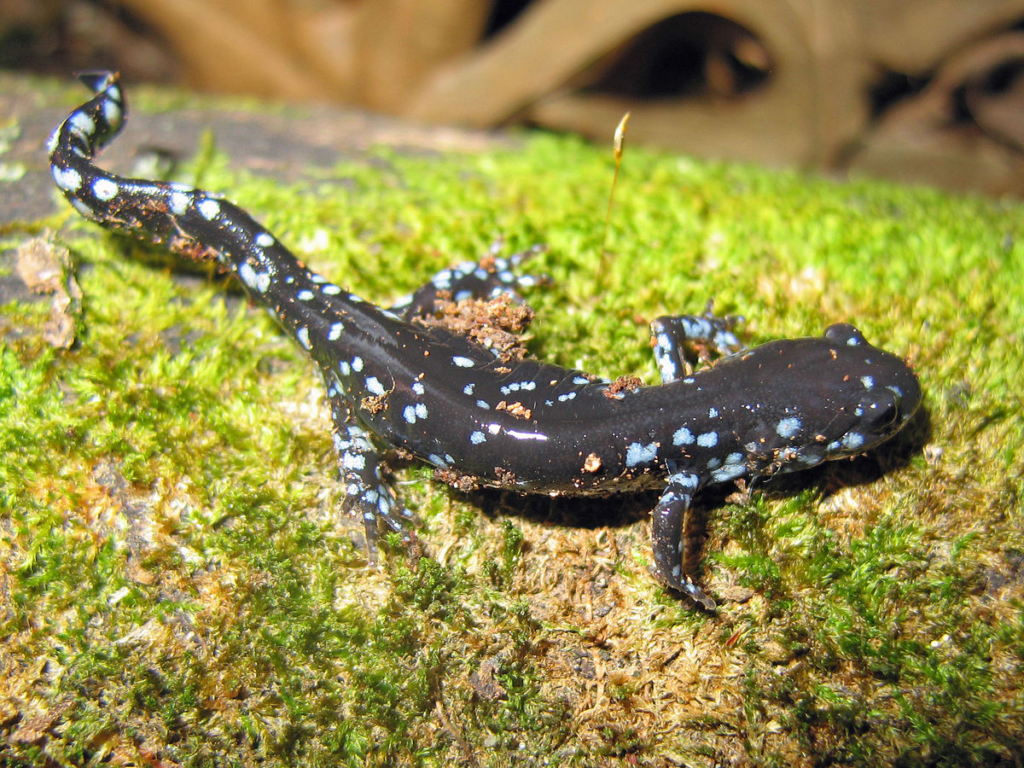 If towns are shutting down entire roads for you, you must be important, right? Every spring in central New Jersey, temporary road closures are created to protect amphibians who migrate across roads in search of perfect mating grounds. In March and April as the temperatures warm to 40-45 degrees, amphibians including frogs and salamanders make the trek from their winter homes in forested areas, to nearby vernal pools where they prefer to mate and lay eggs.

This journey is completed under the cover of darkness, typically between 7 and 9pm, so it is no wonder that cars unknowingly hit and kill these critters as they make their way across roads. Local environmental groups such as the Conserve Wildlife Foundation of New Jersey, the Friends of the East Brunswick Environmental Commission, and the Sourland Conservancy coordinate road closures and crossing guards that direct traffic to ensure safe crossing.

One of the most cherished of these creatures is the Blue-Spotted Salamander. They get the star treatment of closed roads and human crossing guards because they are only found in the northern and central parts of New Jersey, not much farther south than Somerset County. In fact, they have not moved forward with paving portions of Montgomery Road  in Hillsborough for this very reason. If you have ever driven on this road, chances are you’ve passed directly over an amphibian migration path!

These routes are protected so the Blue-spotted Salamander can successfully mate and ensure the continuation of the species. Volunteer crossing guards also use this time to get current population counts, as well as grimmer numbers, such as the 20% mortality rate each year during migration. On peak migration nights, especially in rainy conditions, hundreds of amphibians can be counted crossing per hour!

These extreme steps have been taken because the Blue-spotted Salamander is considered an endangered species in New Jersey. If they do not survive the road-crossing to procreate, the continuation of this species in our area is threatened. Vernal pool and other habitat loss, land development, and sensitivity to water quality through improper use of pesticides and insecticides all threaten the survival of the species in our area. 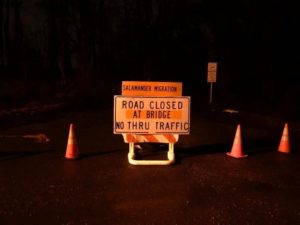 The salamanders cross the roads seeking vernal pools, seasonal depressions in the ground that are covered by shallow water during the winter and spring, but are dry for the rest of the year. With no inlet or outlet stream, vernal pools collect surface water from rainfall or flooding. They function as a small pond when filled with water. Vernal pools are perfect for Blue-spotted Salamanders seeking a water source that is deep enough to avoid drying out, yet shallow enough that predatory fish are not able to survive. This means timing is everything for a successful mating season, as the existence of vernal pools are short-lived.

When the Blue-spotted Salamander reaches sexual maturity (around 2-3 years of age), it returns instinctually to the very same spot it was born, guided by a small organ in the brain that reads the earth’s magnetic field. After mating, females lay small clusters of up to 300-400 eggs and return to their winter homes.

The eggs incubate for 2-3 weeks, and after hatching the larvae are born with gills for breathing in the water. In this stage they eat constantly from the vernal pool including zooplankton and small aquatic invertebrates. The larvae live in the water for 90-100 days, maturing by June or July when their lungs and legs develop so they are no longer dependent on the vernal pool for survival. As juvenile salamanders they leave their birthplace until returning as adults to mate.

Blue-spotted Salamanders are a subterranean species of amphibian called “Mole Salamanders” spending most of their adult life underground. They especially prefer moist areas under logs and rocks or near small bodies of water. As nocturnal feeders, adults come out at night to feed on a variety of invertebrates such as worms, insects, snails, and slugs. Blue-spotted Salamanders have a bluish-black body scattered with white and yellow spots, and can be anywhere from 4 to 6 inches long as adults.

Blue-spotted Salamanders and other amphibians are important to our ecosystem for many reasons. They eat insects that are considered pests as well as insects that spread disease, and they are prey for other wildlife. Like moths, they are an indicator species. Their presence, or lack thereof, can help diagnose the health of our environment. According to the New York Times, salamanders may even reduce the release of carbon into the atmosphere. The bugs they consume produce leaf litter that contribute an average of 47.5% of carbon production.

What you can do to help:

–Volunteer as an amphibian crossing guard in March and April! For opportunities, visit websites for local wildlife organizations like the Conserve Wildlife Foundation of New Jersey, the Friends of the East Brunswick Environmental Commission, and the Sourland Conservancy.

–Drive with care to avoid hitting migrating amphibians! Especially on rural roads during March and April on rainy nights.

–Certify vernal pools on your land through the New Jersey Department of Environmental Protection’s Endangered and Nongame Species Program (ENSP). ENSP maps and inventories vernal pools to be included in the state’s land use regulation database in order to implement vernal pool protections.