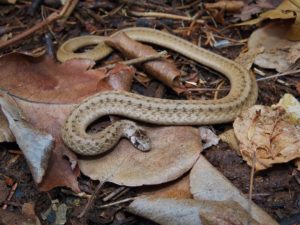 A DeKay’s brown snake I encountered in Newark, NJ flattening its body as it felt threatened.

Nowadays, a large proportion of world’s population lives in urban areas, but we know that cities are not only home to humans. A variety of animals share our cities with us. Scientists often term them as “urban adaptors” and “urban exploiters”. Among them there are the infamous weedy or pest species like cockroaches and mice, common backyard birds like house sparrows and rock pigeons, and relatively large mammals such as raccoons and white-tailed deer. But do you know, some more elusive and secretive animals also call urban home, like snakes? My research focuses on one of the snake species that frequently occur in urban environments in New Jersey, DeKay’s brown snake (Storeria dekayi). 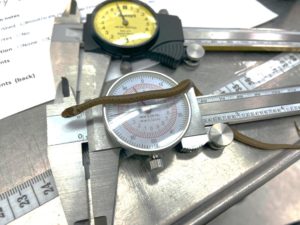 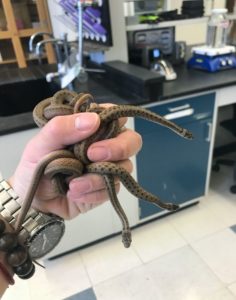 To study snakes, the first step is, of course, to find them. Ecology studies of snakes are always hard because snakes are secretive. However, compared to other snakes, DeKay’s brown snakes commonly form aggregations, which makes my sampling work much easier (although there are still many unsuccessful field days!). For example, one of my study sites is a small area of urban green space in the city center of Newark. The green space is surrounded by paved sidewalks and buildings, and is only about 6,800 square feet in size. However, I have already caught about 40 different individuals of brown snakes there! I remember there was this one time when I caught seven snakes in close proximity in this green space in just ten minutes. Like this Newark population, most of the brown snake populations I have discovered so far inhabit very urbanized areas. Besides the Newark site, some other sites include, for instance, a park surrounded by residential areas in Leonia, an abandoned railway next to an industrial park and highways in Perth Amboy, and a forest patch on Rutgers University-New Brunswick campus. 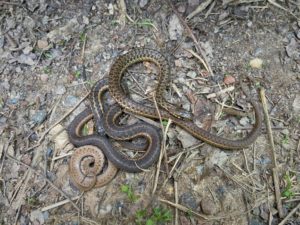 For each snake I collect, I take photos of them and measure their morphological traits, such as their head dimensions and body length. Photos of snake head patterns can be used to identify recaptured individuals. Data of recaptures are useful to estimate local snake population size. I also obtain data from both snake photos and measurements to compare snakes from localities of different urbanization levels. This comparative approach helps me understand whether certain morphological traits are selected for urban-dwelling of DeKay’s brown snake. Although my research is still ongoing, a rough estimate of the local population shows that there might have more than 60 individuals in the Newark green space alone! Initial morphological comparison results suggest that DeKay’s brown snake display distinct sexual dimorphism (a condition in which two sexes of the same species display different morphological characteristics). For instance, males brown snakes tend to have longer tails and wider heads compared to females. Results also reveal that snake morphological differentiation does occur across different localities. Head shapes among snake populations appear to be different as well. 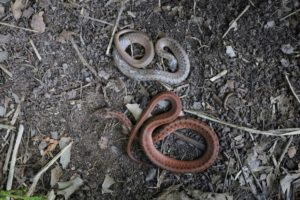 Besides the snakes themselves, I also sample their potential food source, earthworms and slugs in snakes’ habitats to assess if urban environment has the potential to change the feeding habit and dietary structure of DeKay’s brown snakes. In the case of earthworms, only nonnative species can be found in New Jersey. Previous studies have shown that many of these nonnative earthworm species are good urban colonizers that can reach high density in some urbanized areas. Consequently, if abundance of earthworms at my study sites is also high, then abundant earthworms as sufficient food sources have the potential to promote the wellbeing of both snake individuals and populations in urbanized areas. An initial field sampling trial at one of my study sites with abundant snakes supports this idea. I found 48 earthworms of at least three species in a small 30 X 30 cm area with only a 5 cm deep soil layer. 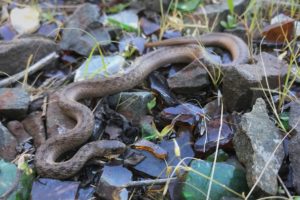 A DeKay’s brown snake found underneath a plywood in Perth Amboy, NJ.

My study of urban DeKay’s brown snake is meaningful because it helps us understand how a less studied taxon respond to urbanization. This could provide valuable information on the ecology, and ultimately preservation, of biodiversity in urbanized areas.

Check out my website to learn more about my urban snake research!