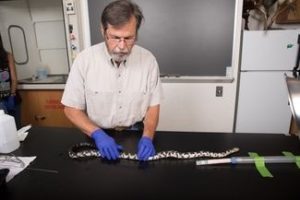 Dr. Howard Reinert, a professor at The College of New Jersey, is leading a study into endangered corn snakes in the Pine Barrens.  Photo credit Lauren H. Adams

Deep in the Pine Barrens, poachers can wander for hours at a time.

Their eyes scan the forest floor for dull orange, camouflaged corn snakes, a state-endangered reptile long threatened by a combination of encroaching development and collectors who sell the animals for about $300 each on the wildlife trade, says Dr. Howard Reinert, a professor at The College of New Jersey.

But next year, part of a study led by Reinert is coming to an end — one that will shed light on how New Jersey can better protect the population from its many threats: illegal collecting, wildfires and habitat loss resulting from slow urbanization. The animals are found from Florida to the Garden State.

“If you go to any pet store, you’ll find them for sale,” Reinert said. “New Jersey’s corn snakes are one of those desirable animals.”

Reinert, whose been at TCNJ for more than two decades, has been tracking the movements of 35 corn snakes throughout the dense Pinelands for the past four years with students. The goal, he said, is to study their movements and ultimately better understand how to protect the species. 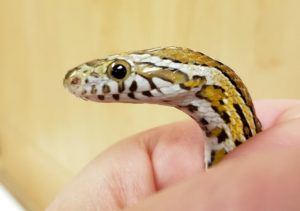 With a keen eye, Reinert wanders through the Pinelands each summer searching for the slithery creatures above ground or burrowed in their dens. He scoops them with bare hands and no fear.

“They typically don’t bite… You usually let snakes hold you basically,” he explained while sitting inside his office as a fully grown corn snake navigated between stacks of papers on his desk.

Back in his lab, Reinert administers anesthesia to the snake and makes a small incision on its tail before inserting a $150 transmitter that looks like a thin, metal wire. Then, he sets them back in the wild – and waits.

Using a radio receiver, Reinert and his students track the snakes’ movements to study their behaviors, including how far they travel, how controlled burns impact them and where there are population centers. The students record tree measurements, temperatures and the habitat types where the snakes live.

“We’ll sort through the data later this year,” said Emmalee Kugler, a senior at The College of New Jersey working on the project.

And those results will be used to guide the state on conservation efforts, Reinert said.

That could mean building barriers in some areas to stop the reptiles from entering roadways, or tunnels or bridges to help them cross streets. Conservation officers may use the GPS points to learn where to patrol more regularly, and the Forest Fire Service can use the data when creating prescribed burn plans.

“We’re trying to understand all we can about their behavior so we can understand how to protect them,” Reinert said. 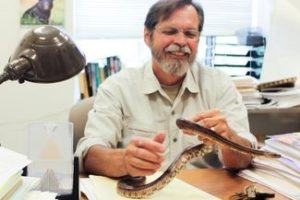 Dr. Howard Reinert, a professor at The College of New Jersey, is leading a study on state-endangered corn snakes. Photo credit Avalon Zoppo

The study is being done with the Pinelands Commission and the Pemberton-based Herpetological Associates, Inc. It’s supported by the Endangered and Non-game Species Program of the DEP’s Division of Fish and Wildlife.

So far, Reinert and his students have learned a few things: the snakes don’t wander aimlessly.

The average corn snake moves 60 feet per day, or three to five miles in an active season from April to November. They have wintering sites to hibernate in cold months, then travel each summer to the same locations.

There are at least four to five corn snake “population centers” in the Pinelands, areas known to harbor the species.

The corn snake population in New Jersey is difficult to determine, but ever-expanding suburban sprawl on the fringes of the protected Pinelands threatens to further shrink their range, said Lisa Lacroix, conservation captain for the state’s Division of Fish and Wildlife.

In New Jersey, the conversation of open space to urban land has increased over the decades, with more than 323,000 acres entering the urban land class between 1986 and 2007, according to a 2010 study by two Rutgers researchers.

With 12 conservation officers patrolling 1.1 million-acres of forest, enforcement can be difficult.

Over the last 10 years, nobody has been charged with stealing corn snakes in New Jersey, Lacroix said, though the practice still carries on undercover with a potential fine of up to $25,000.

Inside the biology building at TCNJ, one small room lined with cages and tanks is a home for baby snakes who Reinert’s team potentially saved from another major threat: predators like coyotes, foxes and raccoons that eat snake eggs.

The researchers scoop up corn snake eggs to incubate inside the lab. They then tag the baby snakes with tiny, pencil tip-sized chips, Reinert said.

Half of the snakes are released immediately, while the other half are raised in the lab and released months later. The goal is to save the eggs from being eaten by predators before hatching. So far, they have tagged about 200 snakes.

“What we’re trying to do here is learn something about survivorship,” he said. “That’s what this is all about.”