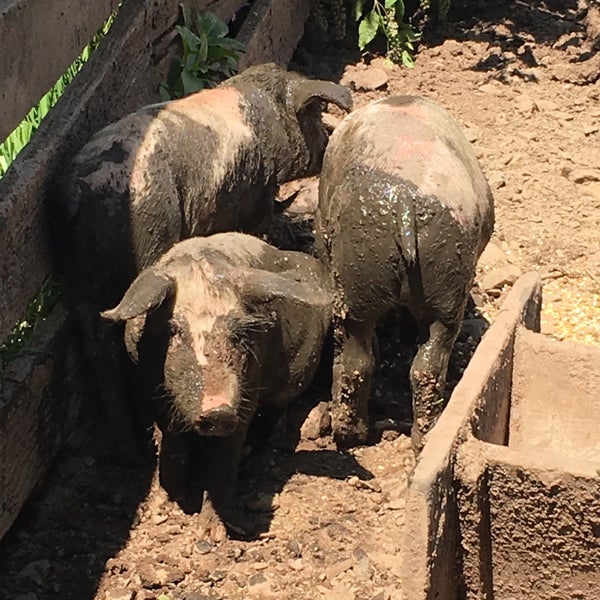 Pigs finding some mud on a hot summer day.

Let us debunk a couple common misconceptions right here and now.  At one point or another, we have all perhaps used the phrase, on a hot summer day while soaking in the sun along the Jersey Shore, “I’m sweating like a pig!”  The message communicated is that one is sweating profusely.  And then invariably, a well-intended (though ultimately misinformed) someone will offer the following, “Actually, pigs don’t sweat.”

The problem with both (“sweating like a pig” and “pigs don’t sweat”) is that neither truly conveys the correct message.

See, swine are mammals, and though there are a few notable exceptions to this rule, by and large most mammals are warm-blooded.  The scientific term for animals that have their own natural form of thermoregulation (the ability to keep internal temperature within certain boundaries, even when the surrounding temperature is very different) is called homeothermy.  Swine, being the warm-blooded mammals that they are, are considered a homeothermic species because they are able to maintain a relatively stable internal temperature through a metabolic process of thermoregulation, even when the outside temperature varies.

Sweating is a great way for most mammals to cool off!  My recommendation in the hot summer months is to jump into that amazing Atlantic Ocean along our Jersey Shore to cool off.  If that isn’t an option, sweating is another way for us humans to cool down.  In fact, sweating is the way our own bodies thermoregulate.

The “problem” for swine is that, though they do have sweat glands (thus they do sweat), relative to their size, they do not have a lot of sweat glands, so sweating isn’t as effective as it is for us to thermoregulate.  That written, swine are clever, and one way they adjust their internal temperature is finding their own “Jersey Shore” to jump into the muddy pool.  When it gets warmer outside, swine find cool water or mud to have a similar effect to them as sweating does to us.

So, the next time you hear a friend say, “It’s so hot out I’m sweating like a pig”, feel free to correct them, but make sure you don’t have someone else come along and correct you.  About the only real way someone will find themselves sweating like a pig is when they are just breaking a bit of a sweat.  Unless your friend is staying cool by jumping into a mud puddle, odds are they aren’t really sweating like a pig.