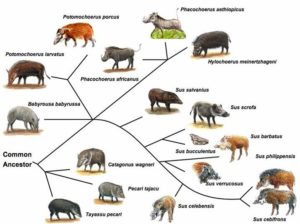 According to author Jared Diamond in his work “Guns Germs and Steel”, of all the large animals in the history of the world, only 14 have been domesticated: goats, cows, horses, Arabian camels, Bactrian camels, llamas and alpacas, donkeys, reindeer, water buffalos, yaks, Bali cattle, Mithan (gayal, domesticated Gaur) and our personal favorite of this blog.., swine.

What was it that made swine so receptive to domestication?  When and where did this supposedly take place?  And, what is it that makes swine domestication so interesting?

Before getting to any of those questions, let us first understand what is domestication in the first place and what was it that made swine one of the 14 large animal species to become domesticated?  The short version of the long story is domestication is the process of “sculpting” wild animals for human use.  This is something that takes place over thousands of years, and something that is different from “taming” an animal.  (A good rule of thumb, “domesticated” animals are found in barns, “tamed” animals are found in circus tents.)

With that baseline understanding in place, let us now delve into what makes those 14 species of large animals listed above so unique.  Here are a few common characteristics:

But why pigs?  Aside from bacon, what do pigs bring to the table?  (Okay, okay, ESPECIALLY bacon.., but stick with me for a moment.)

Part of the reason swine were relatively easy to domesticate is because they fit into the above four mentioned domestication characteristics.  They are omnivorous, social, reproduce very easily (one healthy female pig can produce 10 new pigs with just a four month gestation period), and they have a social hierarchy where humans can place themselves at the top.

So now that we know the why of swine domestication, let us get into the when and where this took place.  Obviously there is no way of knowing the exact details, but most who study this agree that the domestication of pigs took place thousands of years ago in two distinct regions.  Charles Darwin himself in 1868 theorized that there may have been two major forms of domestic pigs, one from Europe (Sus scrofa) and one from Asia (Sus indicus).  There is a pervading theory among those who research such things that there were actually “pockets” or “islands” of swine domestication that took place all over Europe and Asia.  These were not literal “islands”, but rather human inhabitants of one location domesticating various wild boars in that location with other inhabitants in another location doing the same.  The theories go on to suggest that these early domesticated pigs were herded from place to place where they mated with other wild boar populations to create a genome that is as unique as modern day domesticated pigs.

In the European and Asian locations thought to be the homes to early domesticated pigs, it seems that the process of domestication began with local hunter-gatherers hunting wild boars.  What followed after that was a long protracted period of time where these wild boars eventually became domesticated pigs that gave them dispositions which made them more easily managed by humans.

This backstory about Sus Scrofa (Europe) and their Sus Indicus cousins (Asia) is important to understand when delving into what it is that makes the domestication of swine so unique and how that special genome of the domesticated pig came to be.  With the developments of improved technology and trade routes, attempts to create stronger pigs took place through cross breeding the pigs from Europe with the pigs from Asia.  Interesting to note is that, as mentioned above, Sus Scrofa and Sus Indicus breed with various wild boars.  Why then don’t modern domesticated pigs look like their wild boar cousins?

And that, my friends, is where things get interesting!

As mentioned earlier, these early farmers, in breeding pigs with characteristics they wanted, selected animals that looked like what we today would call “pigs.”  Over the course of time, these once wild boars began to display characteristics more familiar with us today as modern swine.  See, though there was constant interbreeding with wild boar herds between both the European and Asian pigs, farmers in both regions still went out of their way to select pigs to breed that contain the characteristics that we today would define as swine.

Thus, the interesting take away is that it is suggested that, rather than a single constant evolution towards domestication, humans in various different remote locations, thousands of years before modern communication, independent of each other, created the modern pig.  Interesting as that is, the most exciting part is yet to come.  With modern advances in genetics, scientists today may be uniquely equipped to solve these riddles and shed greater light into how (and when.., and where) domestication of large animals such as pigs took place.