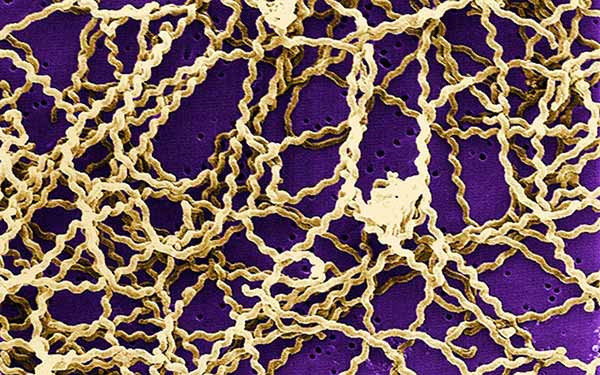 Leptospira bacteria (photo from the Center for Disease Control)

There are several common diseases in cattle which are caused by bacteria that are important for 4-H members, their parents, and club leaders to understand because they can cause great harm to the animal if not treated properly. This blog post will describe the signs of these bacterial diseases to help members seek treatment by a veterinarian if these symptoms exist in their project animals. Fact sheets for further study are also referenced since there is much more information to be learned than we can possibly fit into these blog segments. Whenever there is doubt about an animal’s health, a veterinarian should be consulted to confirm diagnoses and develop a treatment plan.

Johne’s Disease-Johne’s (pronounced “yo-knees”) disease is caused by bacteria which infect the small intestine of ruminants, primarily cattle, sheep, and goats. The bacteria grow slowly in the small intestine causing a gradual thickening of the intestinal wall which reduces normal absorption of nutrients and causes the animal to lose weight (even though the animal has a normal appetite). Animals will also have diarrhea. Johne’s Disease is a chronic, wasting disease and usually fatal.

There is no effective treatment for Johne’s; so prevention is extremely important. Cattle are usually infected soon after birth or in the uterus, but the symptoms may not appear for 2 to 4 years. Symptoms include diarrhea, weight loss (even with normal appetite), decrease in milk production, infertility, and eventually death. The first sign in dairy cattle is often declining milk production.

The bacteria that cause Johne’s Disease can be transmitted in milk, manure and also transmitted to a fetus in the uterus. Calves are often infected by swallowing manure from the environment or from contaminated colostrum. Because the disease has a two to four year incubation period, blood testing may not be effective until the heifers are at least two years old. Animals testing positive with the disease cannot be treated and must be culled.

Proper sanitation is critical to reducing the spread of this disease. Keep barns, lots, gutters, holding pens, and alleyways clean, especially those areas where young stock are housed. The organism can survive for months and perhaps years in the soil, especially in moist areas. Since the bacteria is found in manure, it is imperative that you wear plastic booties or rubber boots which can be sanitized properly between barns whenever you are visiting neighboring farms.

Johne’s disease is caused by a bacteria called Mycobacterium avium (subspecies paratuberculosis) or M. avium subsp. paratuberculosis. This is a hardy bacteria related to those causing leprosy and tuberculosis in humans. The bacteria which causes Johne’s disease is found worldwide. The best way to avoid introducing this disease into a herd is to be as certain as possible that animals brought into the herd are not infected. Many states have voluntary Johne’s elimination programs that establish and certify herds to be free of Johne’s disease. Ask your prospective seller if he or she participates in such a program and what the herd’s status is.

Pre-purchase screening of animals may be of some benefit. However, it is important to understand the limitation of the tests. An ELISA test on one animal in a herd may not indicate the presence or absence of Johne’s disease in the herd. It is better to test the entire herd and buy animals only from herds in which all animals test negative. Involve your veterinarian in any discussion of laboratory results. Additional information can be found on these sites and fact sheets:

Pink Eye– Pink eye in cattle, also known as infectious bovine keratoconjunctivitis, is a contagious bacterial infection of the eye. Cattle pink eye is different from human pink eye and is much more severe. Pink eye in cattle is most commonly caused by a bacterium called Moraxella bovis. This microbe uses tiny hair like structures to attach to the white part, (or conjunctiva), of the eye and cause damage. It is spread by flies, which feed on eye secretions mostly in the summer months, providing the perfect recipe for an eye infection. Pink eye is more common in beef cattle than dairy.

Once introduced to the eye, the bacteria causes irritation and tearing. The first sign of a pink eye infection in cattle is squinting. Very soon after the initial infection, the cornea begins to cloud up and soon becomes completely white. An ulcer will form on the cornea and can cause permanent blindness if not treated.

While more common in beef cattle, pink eye can affect dairy animals and negatively impact productivity. The eye pain and stress that pink eye causes can result in weight loss in growing heifers. For the health and well-being of the animal, pink eye should be treated as quickly as possible.

The best way to treat pink eye in cattle is a systemic injection of antibiotic (typically oxytetracycline). Once blood levels are established, this treatment can also provide a therapeutic level of antibiotic in the tears and helps to eliminate the ‘carrier’ state of m.bovis to prevent future outbreaks. This is best done by a qualified technician or veterinarian. Many pink eye cases respond within a day or so. If treated promptly, the cornea will clear up and sight will return. If corneal ulceration was severe, sometimes a small scar will remain on the eyeball.

Prevention is always better than treatment. Proper fly control is really the best way to keep pink eye from ravaging through a herd. Pour-on fly treatments (permithrins) or insecticide laden ear tags are two methods of fly control. Younger calves can be vaccinated against multiple strains of M. bovis if a particular farm has had issues in the past.

Brucellosis is a contagious disease of ruminant animals (like cattle) that can also affect humans. The disease is also known as contagious abortion or “Bang’s disease”. In humans, it’s known as undulant fever. Bovine brucellosis is a serious disease causing decreased calving rates and milk production, weight loss, reduced fertility, and lameness. The fact that this disease can spread rapidly through animal populations and be transmitted to humans makes it extremely serious.

The disease is caused by a group of bacteria known scientifically as Brucella. Of the three species B. abortus, principally affects cattle. In cattle, the disease localizes in the reproductive organs and/or the udder. Bacteria are shed in milk, aborted fetuses, afterbirth, or other reproductive tract discharges. There is no way to detect infected animals by their appearance. The most obvious signs in pregnant animals are abortion or birth of weak calves. Not all infected cows abort, but those that do usually abort between the fifth and seventh month of gestation. Milk production may be reduced from changes in the normal lactation cycle caused by abortions and delayed conception. Calves from infected cows may have infections that are not detected until they become pregnant, abort, or give birth themselves. Even though their calves may appear healthy, infected cows continue to harbor and discharge infectious organisms and should be regarded as dangerous carriers. Other signs of brucellosis include reduced fertility with poor conception rates, retained afterbirths with resulting uterine infections, and (occasionally) enlarged, arthritic joints.

Brucellosis is commonly transmitted to other animals by direct contact with infected animals or when an environment has been contaminated with discharges from infected animals. Aborted fetuses, placental membranes, and other vaginal discharges after an infected animal has aborted or calved are all highly contaminated with infectious Brucella organisms. Brucellosis is usually carried from one herd to another by an infected or exposed animal. Replacement animals should be purchased only from Brucellosis-free states or countries.

Brucellosis cannot be cured, but it may be avoided by using proper sanitation methods, herd management, and participating in the National Brucellosis Eradication program. The basic approach has been to vaccinate calves, test cattle for infection, and send infected animals to slaughter.

The most common way humans are infected with this disease is by eating or drinking contaminated, unpasteurized (or raw) milk products. In fact, there was a case in New Jersey in 2017 where a woman contracted Brucellosis from raw milk. When sheep, goats, cows, or camels are infected, their milk is contaminated with the bacteria. If the milk is not pasteurized, these bacteria can be transmitted to persons who drink the milk, eat cheeses and other dairy products made from raw contaminated milk. Humans can also contract the disease when slaughtering infected animals or when processing contaminated organs from freshly-killed, brucellosis infected livestock, wildlife or feral swine. For more information, check out these fact sheets:

Leptospirosis is a bacterial disease that affects domestic farm animals, wildlife, and humans. There are many different strains of the bacteria which can be carried by rodents and many other wild animals including rabbits, skunks, and birds. Cattle, pigs, and dogs are the main domestic animal carriers of leptospirosis. Leptospirosis in cattle is generally caused by one of two strains of the bacteria and they infect the kidney and genital tract of cattle.

Transmission of leptospira often involves direct contact with urine, placenta, or milk. It can be transmitted during breeding and through the placenta to the fetus. The most common transmission is through infected urine in the environment. Dairy feeder calves in commercial feedlots sometimes suckle the sheaths and scrotums of other calves in the pen. This would be a direct contamination of infected urine from carriers by this suckling habit. A calf rearing system of calf hutches does help to prevent spread of this disease.  Leptospira can also survive in the environment, favoring moist and moderately warm temperatures. Leptospira can survive for extended periods in stagnant water (i.e. waterholes in pens). Survival of leptospira is short lived in dry soil, cold temperatures, or very hot temperatures. Therefore outbreaks are most common in dairy calves in the fall and spring.

For more information about this bacterial disease, please check out these web sites and fact sheets:

This is just a short list of bacterial diseases common in cattle. More posts will be coming next year about viral diseases and metabolic diseases. In any case where your 4-H project animal is displaying behaviors which are not normal, or if the animal is not growing, eating, or looking normal, you should always contact your veterinarian.