New Jersey 4-H Swine Projects have many names – pigs, hogs, boars, sows, barrows, and gilts.  Whatever the name, they all are members of the Suidae family.  Members of this family are “artiodactyl” (a fancy word for “even toed ungulates”) mammals that include in their family tree, in addition to the domestic pig, warthogs, wild boars, and even razorbacks.  As fascinating an experience (experiment?) it would be, this Agent is not aware of any razorbacks being shown at any county fairs (and let’s keep it that way).  So, for 4-H purposes, rather than focus on the larger Suidae family, let our focus be on the different domestic swine breeds most commonly associated with market 4-H swine projects.  Let us therefore delve deeper than just “pigs, hogs, and swine” and understand the differences between the most popular domestic swine breeds.  Though, to paraphrase Shakespeare, “A swine by any other name would smell as…,” well.., would smell, for 4-H swine market projects, there are eight swine breeds seen time and again: Chester White, Landrace, Yorkshire, Berkshire, Duroc, Hampshire, Poland China, and Spot.

Before delving too deep into the different types of swine breeds, it is important to note that a swine project that has been cared for, raised properly, and does not have health issues will be a competitive project in the show ring, no matter what breed a 4-H youth member selects.  No breed is better nor worse than any other.  Hard work, persistence, and treating a swine project with care is what will give a 4-H swine project exhibitor the competitive advantage – not necessarily the breed of their project.

Swine in this breed are Chester White, Landrace, and Yorkshire.  White breeds are known for their reproductive ability.

Chester White – of the white breeds, the Chester White is often cited as the most durable.  Noted not only for their gain potential (a healthy Chester White can as much as 1.4 pounds of gain per day), those in the industry also acknowledge their muscle quality.  A distinguishing characteristic are their medium-sized, “droopy” ears.  The natural color of Chester White pigs make sunburns something to be careful of – be sure to provide this breed access to shade to protect it from the sun.
FUN FACT! This breed comes from Chester County, Pennsylvania, so, whereas many of the other breeds mentioned originate oversees, this one is an American breed!

Landrace – like their Chester White cousins, Landrace swine are noted for their droopy ears.  Landrace pigs are typically long and lean compared to other breeds.  Sows (female pigs) of this breed produce milk longer for their piglets compared to other breeds, peaking at around five weeks (which gives this breed the nickname “America’s Sowherd.”)  Like others in the White Breeds, it is important to provide Landrace swine access to shade to as to prevent sunburns.
FUN FACT!  This breed originated in Denmark from the Danish Landrace breed in the late 1800s.  Large White hogs from England were bred with native Danish hogs to create this breed.  Landrace hogs first made their appearance in the US in 1934. 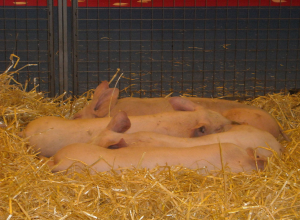 Yorkshire – this is the most-popular breed of swine in the United States and is known as “The Mother Breed” due to its ability to have and care for large litters.  Unlike Chester White and Landrace, Yorkshire swine have ears that stand erect.  Also known for their muscle, Yorkshire breeds tend to have low back fat compared to other breeds and a higher proportion of lean meat.  As with all White Breeds, Yorkshire pigs must be provided shade to protect them from the sun.
FUN FACT!  Yorkshire hogs are an English breed, first believed to be imported to the US around 1830 to Ohio. 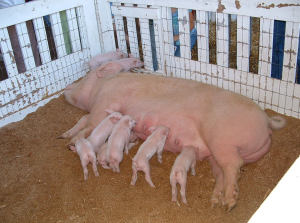 Swine in this breed are Berkshire, Duroc, Hampshire, Poland China, and Spot.  Colored breeds are known for their ability to pass along their muscle tone and durability.

Berkshire – this is the third most popular breed of swine in the United States.  This breed of swine is known for fast growth, as well as reproductive efficiency and meat quality.  Berkshire pork tends to have a higher content of fat which is useful for long cooking.  This particular breed of swine is, incidentally, the oldest registered breed of swine in the world. (The American Berkshire Association –which gives pedigrees only to Berkshire pigs directly imported from established English herds or to those tracing directly back to such imported animals – was formed in 1875.)
FUN FACT!  Also an English breed, Berkshires have a long and storied history in both the UK and US.  The first Berks were thought to have made their way to the US in 1823. 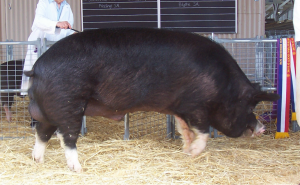 Duroc – the second most popular breed of swine in the United States.  Duroc breeds are red/rust colored with ears that droop.  This breed is usually medium-sized compared to other popular American swine breeds.  This Colored Breed of swine is valued not only for its lean-gain efficiency, but also for its muscle qualities and durability.
SUPER FUN FACT!  New Jersey actually holds a special claim to the origins of the Duroc breed.  In 1812, early “Red Hogs” were bred in New York and New Jersey.  The breed of swine that eventually became known as Durocs were the progeny of these early “Red Hogs” that were crosses of Red Durocs from New York and Jersey Reds from New Jersey. 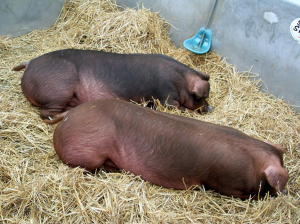 Hampshire – this breed is black with a white “belt” through their center.  A heavily muscled and lean meat breed, Hampshire swine are noted for having minimal backfat.  Though the Berkshire pedigree is the oldest in the world, Hampshire swine breeds are considered to quite possibly be the oldest swine breed in the United States.
FUN FACT!  There are questions regarding the origins of this breed, though it seems most likely their ancestors were native to Scotland.  The imports to the US between 1825-1835 were brought from Hampshire County in England, giving these hogs their name. 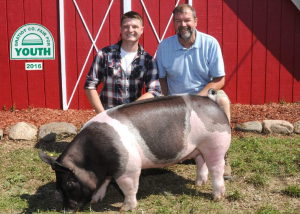 Hampshire pig. (And the blog author on the left!)

Poland China – a black colored pig with a distinctive white face and white “socks” on its feet, Poland China Swine are known for their steady rate of gain as well as being lean and muscular.  It can be easy to confuse a Poland China with their Berkshire cousins.  The easiest distinguishing factor between the two breeds is that whereas a Poland China has droopy ears, the Berkshire breed has ears that stand erect.
FUN FACT!  With a name like “Poland China,” of course this breed of swine originated in Ohio.

Spot – with a name that matches its physical characteristics, the Spotted breed of swine is easy to recognize because of its distinctive large, black and white spots.  Spots are known for their carcass quality as well as feed efficiency.  Spotted females in particular are noted for their docility and durability.
FUN FACT!  Spots have American roots as well.  Originating from the Poland China hogs from Ohio, boars were brought to Indiana and cross bred with other excellent stock already there.  The results were a easy feeding hog with large black and white spots. 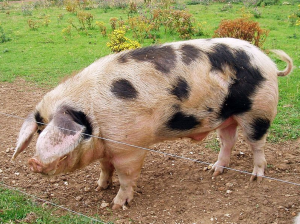 As stated earlier, no one breed is better than any other.  A swine project that is well cared for and raised properly will be competitive.  A 4-H member who takes care of their animal and attends to its needs will succeed regardless of the breed of the animal.

However, part of being a competitive and successful 4-H swine exhibitor is being aware of the different breeds of swine and knowing what those differences are.  “Pigs, hogs, and boars” encompass a lot.  Indeed, nearly anyone with a rudimentary understanding of the larger “Pig Family” can identify the distinguishing factors between a razorback and a Duroc, for example.  That written, it takes someone with a greater level of understanding to readily be able to identify the much less discernable differences between a Berkshire and a Poland China.