Are llamas and alpacas the same? What’s the difference? Where did they come from? What do I do with one after I buy it? And will it spit at me?  These are commonly asked about llamas and alpacas. This post will attempt to answer these questions and more by referencing the Rutgers Cooperative Extension Fact Sheet (FS917) titled Llamas and Alpacas. 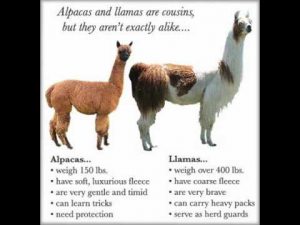 It is a common misconception that llamas and alpacas are one and the same.  They are in fact two completely different species.  Both belong to the Camelid family and are natives of South America.  Their characteristic traits of being hornless, cud-chewing ruminants as well as having an even number of toes and padded feet are responsible for their inclusion in this family (FS917).  The vicuna and guanaco are also relatives of the llama and alpaca.  Alpacas and llamas are known for their gentle temperaments, easy care, pack abilities, as well as fiber.  Some of the differences between the two animals include:

Historically, llamas and alpacas have been used for packing, guarding, and fiber production.  However, llamas make the better pack animal as they have a straight back and can carry a heavier load than an alpaca.  They can typically carry 70 to 120 pounds.  Alpaca fiber is sought after over that of a llama because it is finer, oil free, lightweight, and yields approximately 93% of its original weight after processing (FS917).  Llamas have been reported to be good guard animals against coyotes and dogs.

Another common misconception is that llamas and alpacas are aggressive and spit regularly at their handlers. Just like people, alpacas and llamas have unique personalities. Some are quiet and very laid back while others are noisy and inquisitive. Mainly they are mild tempered creatures who thrive in a herd environment.  With alpacas, spitting is generally observed between herd-mates to assert dominance and is rarely done towards humans unless they are provoked. Llamas have a slightly more aggressive nature and have been known to spit at the casual passer-by.

Alpacas and Llamas are generally easy to keep. They require less land and less food than other farm animals.  For example, one acre of land can sustain 5-10 alpacas or 4 llamas depending on the quality of pasture. They tend be gentle grazers – meaning they trim the grass instead of destroying it entirely and because of their pads and toenails; they tend to be easy “walkers” on the pasture itself. Routine health checks include annual vaccinations, worming, toenail trimming, and shearing.